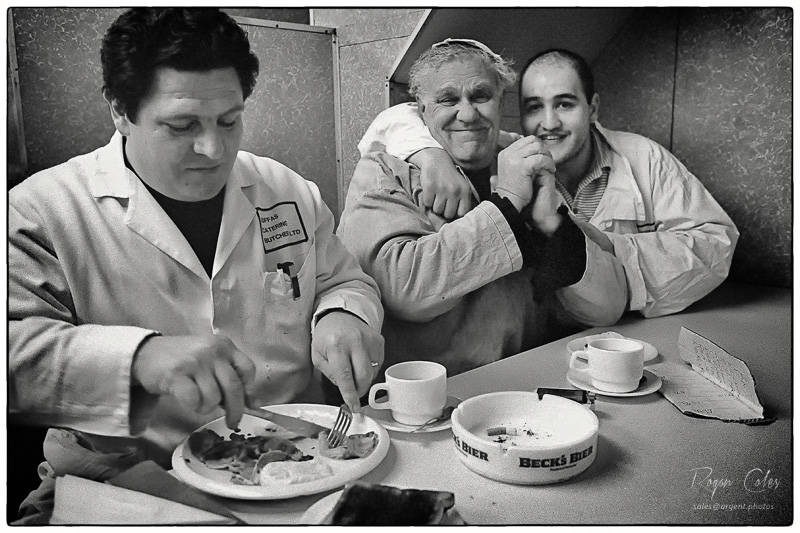 This image is not new and, for that matter, nor is it that old. Well, this within the scheme of things.

I recently flighted this image over at www.LeicaShots.com with something of a story behind the image. Will more or less repeat that story here.

I had been working at Smithfield Market through the night. By “working” I mean I was working on a self-assigned social documentary project and doing my photography there.

The first time I ever encountered the market was during the day some time. The place pretty derelict and abandoned. Meaning to say the place was closed and not a sole in sight. Didn’t think much about it. Then, from time to time, the place would pop up in the local news which had me looking – as in doing research in the local business library. This coupled with the fact that I may have through there one evening either on my way to or from the Barbican Centre. At this time of day the place was now alive and pulsating.

Back to this picture. Other than the pubs in the area, there were several places where you could pick up a cup of strong tea and a good working man’s sandwich. I discovered there was a sit down greasy spoon in the basement of one of the market halls. At that time of the morning I needed something to eat and wanted to sit down.

I ambled down to the joint. It was small – a serving counter and a couple of Formica topped tables. After picking up my order took up a seat opposite these gents. The gent in the middle was quite talkative. The other two, less so – both being immigrants.

This shot was almost one of those stolen moments. I had finished my snack. In reaching for my gear, looked at the situation in front on me. In the process of excusing and extracting myself from the table, I looked at the gent in the middle, picked up my Leica and asked, “May I”? At that moment, his companion to the right threw his arm around his shoulder and this was the shot. The gent on the left just carried on eating

So, that’s the story behind the making of this picture. The other thing to look at here is, what is the appeal of this image? Like all else, this question is a little subjective and – as they say – your mileage may vary.

I’ve always enjoyed the contrast in this image – between the 2 gents on the right hamming it up and the gent on the left not batting an eyelid – just tucking into his breakfast.

This is image is full frame and the “limitations” – if any – is in using a range finder camera and shooting up close. This evident here. The “here” part I’m referring to is the “air” or space on the right of the image.

I used a 28 mm to take this picture. And while I had a wide angle viewer, I guess I must have been shooting through the range finder, this to get the focus right.

Anyway, this is a one off shot – as in one frame. That’s the way it was then.

More images from whence this image is derived can be found here in this collection – Smithfield Market
_____
THE LOST YEARS PROJECT
The basic remit of this, The Lost Years Project, is to raise funds to bring this image together with its associated body of work and other related photography done between 1976 to around 1994 together, to digitise the negatives from which these images are derived and then, to create various products such as prints, print portfolios and books featuring this photography. There is a wealth of photography here that should find its way into the public realm – one way or the other. The photo galleries and PDF eBooks I have on offer here are but a small token of this effort. There’s a lot more from where all this came.

_____
TECHNICAL NOTES: This image was taken using a Leice M-3 camera and a Leitz 28 mm f/2.8 Elmarit [Type 3] lens. The film used was likely to have been Ilford HP5 and developed in Ilford’s Ilfotec HC, a black and white film developer.
_____
This article was originally written and published on January 20, 2011 on a predecessor to this website and uploaded here on 12 June, 2018.