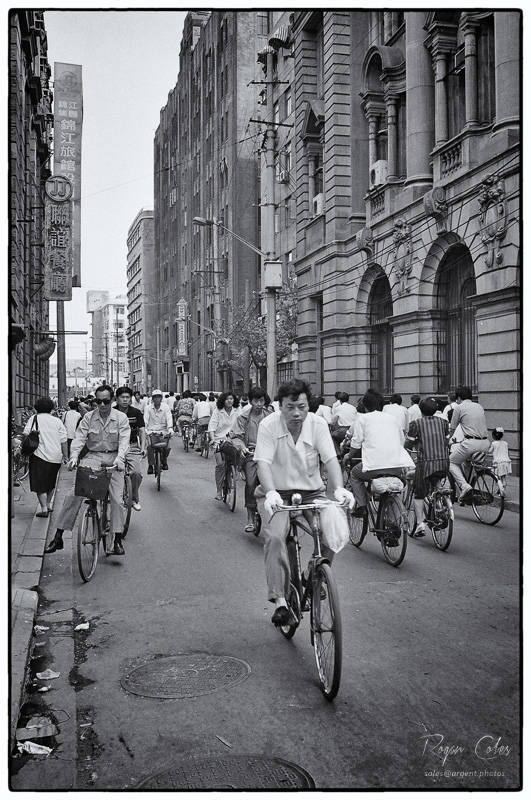 At the time, there was also no metro system. Today Shanghai now has one of the largest mass transport systems in the world.

At the time, save for the ubiquitous red Passat taxis, there was little in the way of private transport, be these cars or motorcycles. At the time, rush hour in Shanghai was mainly made up of bicycles. On a rainy day this usually made for a spectacular if not unique sight as a colourful sea of umbrellas and cyclist clad in all manner of rain wear snaked its way along the main thoroughfares in the Puxi area of the city. That was Shanghai then.

Today, while the humble bicycle may no longer reign supreme in this mega city, it is still one of the principle forms of transport. Wherever you go you will still see bicycles – this along side motorcycles of one type or other, taxis, public transport and private cars. The Shanghainese still ride their bicycles as if they still own the road and this is as it should be. Here the bicycle is still respected as are the people who ride them.

In recent trips to Shanghai, I’ve tried to retrace my first steps through the part of the city where the above image was taken and, in so doing, have tried to relocate the area where I took this image. Haven’t quite succeeded yet. All I know is that I took the picture in what was once referred to the French Concession or District and not too far from The Bund. The buildings in this area haven’t changed that much and while, at rush hour, there are more motor cycles than there are bicycles, the scenes here are much the same.

Now, to find that exact location. May leave this for another time.

More images from this collection can be found here, China Road.

Enjoy…
_____
THE LOST YEARS PROJECT
The basic remit of this, The Lost Years Project, is to raise funds to bring this image together with its associated body of work and other related photography done between 1976 to around 1994 together, to digitise the negatives from which these images are derived and then, to create various products such as prints, print portfolios and books featuring this photography. There is a wealth of photography here that should find its way into the public realm – one way or the other. The PDF eBooks I have on offer here are but a small token of this effort. There’s a lot more from where all this came.
_____
TECHNICAL NOTES: The camera used in the making of this image was a Canon F-1 and a Canon FD28mm f/2.8 SC lens. The film used was likely to have been Ilford HP5 and developed in Ilford’s Ilfotec HC, a black and white film developer.
_____