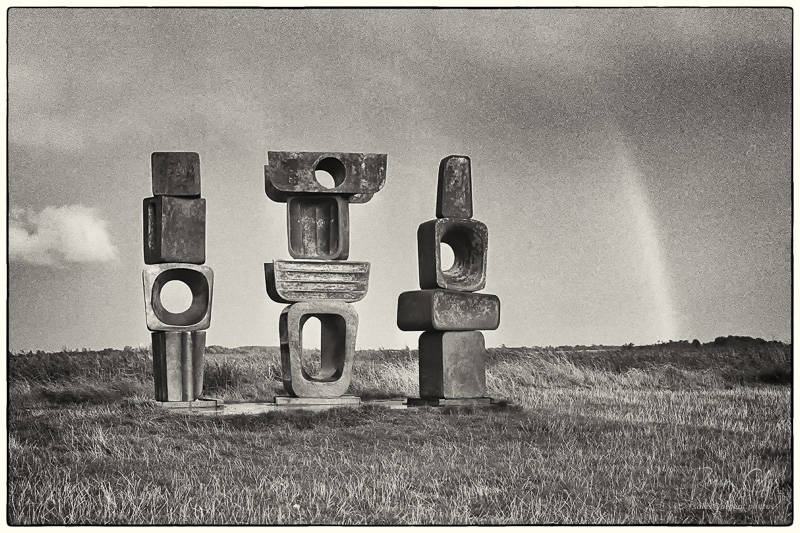 This image was taken while touring through Suffolk. We were staying in Orford and made a trip to Aldeburgh, a town where my great grandparents once lived and where they now lie buried. Either on the way there or, one the way back, we stopped in at the maltings in Snape.

The Snape Maltings, at one time, was a brewery of some past distinction. Later it was refurbished into the establishment that it is today. Among the historical buildings is the Snape Malting Concert Hall. Its here where the Aldeburgh Festival of Music is held in June each year – an event started by Benjamin Britten and Peter Pears back in 1948.

Some way outside the concert hall and as photographed here are 3 pieces from Barbara Hepworth’s Family of Man series of sculptures.

We were touring so, there was no real intent on taking these or any other pictures for that matter. Just the way things go. On this occasion I was compelled to pull out my Leica and take this picture. The sun was going down and a storm had just passed over. For a moment, the soft light of a late afternoon sun seemed be feeling its way over the landscape – this as it slipped towards the horizon and under a break in the clouds. The light was brilliant. In the background there were vestiges of a rainbow, not that this is really all that evident in a black and white image.

And yes, the image was shot on film – as in black and white. In producing this image, this is pretty much it. No need for Photoshop when you’re doing the really thing – as in doing real photography.

This image is one I’ve included in a series I’ve called, “This England…”. The series is basically a collection of images taken over a period of time while I was living in England. Many of the images were taken on trips and day jaunts to various parts of the country and on various occasions. There was and still is a benign aspiration of doing more with these images – an exhibition or a book or something. But, this is where this effort more or less lives – as a hope. Anyway, is there anyone out there in the publishing world who would like to pick up on this one?

More images from whence this image is derived can be found here in this collection – This England
_____
THE LOST YEARS PROJECT
The basic remit of this, The Lost Years Project, is to raise funds to bring this image together with its associated body of work and other related photography done between 1976 to around 1994 together, to digitise the negatives from which these images are derived and then, to create various products such as prints, print portfolios and books featuring this photography. There is a wealth of photography here that should find its way into the public realm – one way or the other. The photo galleries and PDF eBooks I have on offer here are but a small token of this effort. There’s a lot more from where all this came.

_____
TECHNICAL NOTES: This image was taken using a Leica M4-P and a LEICA 35mm f/1.4 SUMMILUX lens. The film used was likely to have been Ilford HP5 and developed in Ilford’s Ilfotec HC, a black and white film developer.
_____
This article was originally written and published on January 20, 2011 on a predecessor to this website and uploaded here on 12 June, 2018.