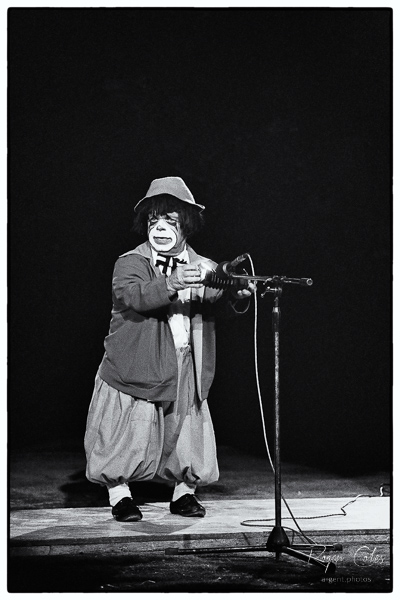 “Ladies and gentlemen, boys and girls, here he is, the one and the only – Tickey the Clown….”, the ringmaster announced, drawing out each and every word.

Then, with the prerequisite drum roll and the cymbal crash, into the spotlight steps this diminutive figure, face painted sad, clad in baggy pants and wearing his characteristic floppy bush hat. In this moment the darkness surrounding the ring erupts with cheers, hand clapping and shouts from young voices, “There’s Tickey…”, “Tickey” and, the odd “Tickey we love you”. This was Eric Hoyland, that small man behind the painted face. In his tenure as the circus clown, he was something of an institution. And, this might be something of an understatement. For a people of a certain age and of a certain generation, he was a central figure in the memories of many.

I cannot now fully remember when I first saw Hoyland – this in his character as Tickey? It could have been that first time I ever stepped into the gloom of the big top with its hot and humid atmosphere, the smells of damp saw dust, the rank smells of animal excreta, the noise of drums rolling, a pop of something or other. I’m not sure now?

At the time, I was 5 or 6 years old I guess. We had just moved to the city – well, a town of a couple of 10,000 people. Either one of my parents seemed to think it was a good idea that we to go to the circus.

Approaching this huge, stripped and baggy tent was intimidating enough. Being enticed into that space seemed excruciating. I mean, why were we going into this gloomy space – what with drums rolling, symbols crashing and a voice booming from the wings somewhere? And then seeing this troupe of diminutive elephants decked out in some sort of decoration sloping around in this pool of light, one bounded by this low wall that shaped up the circus ring.

Seeing these hapless creatures there in that space seemed something of a travesty at the time. I mean, I had seen and had grown up with real elephants – big ones. The real thing. These creatures weren’t big and they hardly looked like the ones I had seen out there on the African plains.

This place was really confusing. Why, during the day must we go into a darkened place? All this noise and banging and people suddenly appearing out of te gloom in these funny costumes. From somewhere, some candy floss or pop corn was procured and thrust into my little agitated hands, this to mollify me I guess. And, this was the impression of my first visit to a travelling circus.

Now, whether Eric Hoyland was there on that occasion or not, I cannot now fully recall. Be that as it may be, in subsequent visits to the circus and at different stages of my young life then, I’m sure he was there as he was for thousands of other kids of a particular generation in that part of the world – my generation basically.

In the ring he was known as Tickey or Tickey the Clown – this given his stature. He was a dwarf. The term “tickey” was a applied to a piece of coinage in circulation at the time – as in the half of five pence which was otherwise know as six pence which was then half a shilling – as in Pence, Shillings and Pounds – colonial style. Somewhere along the line, a tickey went from thrupence (three pence) to two and half pence.

The image that’s the subject of this blog post was taken as part of a personal project I had embarked upon at the time, this to document the life – the daily life as in the “day in the life of” and whatever – of a travelling circus.

One of the facts that galvanized me into putting this project together was that Hoyland had publicly announced that he was to retire from the big top. I made contact with the management of the circus and they gave me open access to document the events and the lives of the people who were part of this circus at this time. This is but one image from that project.
_____
THE LOST YEARS PROJECT
The basic remit of this, The Lost Years Project, is to raise funds to bring this image together with its associated body of work and other related photography done between 1976 to around 1994 together, to digitise the negatives from which these images are derived and then, to create various products such as prints, print portfolios and books featuring this photography. There is a wealth of photography here that should find its way into the public realm – one way or the other. The photo galleries and PDF eBooks I have on offer here are but a small token of this effort. There’s a lot more from where all this came.
_____
TECHNICAL NOTES: This image was taken using a Leica M-4P camera and a Leitz 90 mm f/2.8 Tele-Elmarit-M lens and using Ilford HP5 souped through Kodak HC110 – my preferred brew at the time.
_____
This article was originally written and published on January 20, 2011 on a predecessor to this website and uploaded here on 12 June, 2018.