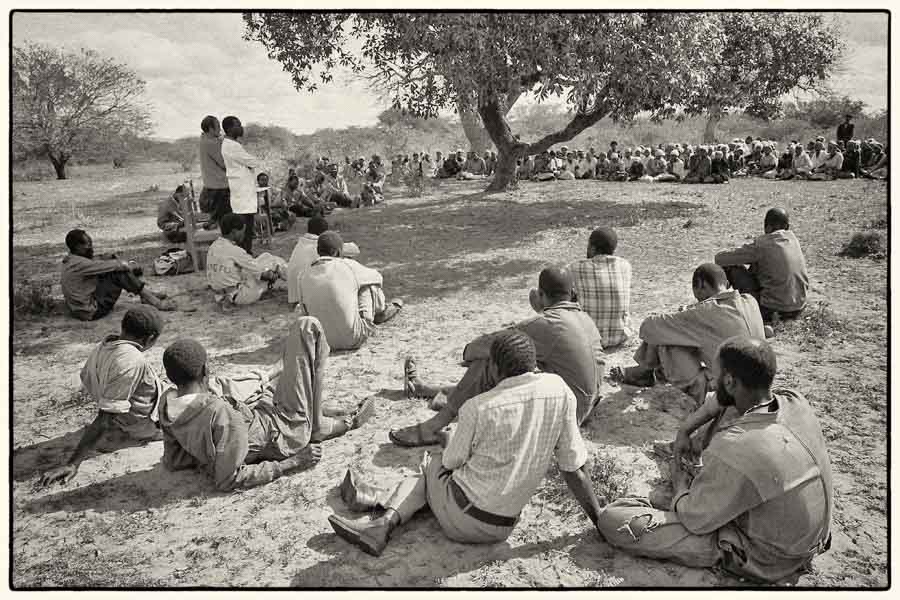 Wow, such an old colonial term that – Zululand. Sort of reminds me of something out of a Rider Haggard novel, not that I’ve read any of his books.

This particular image seems to come up quite often in searches. It was taken in the mid 1980’s while on a trip to Zululand. I went there to document the distribution of aid in the far northern reaches of the territory. This was during a period of prolonged drought that the region was experiencing at the time.

On this particular a day an indaba, a local term for a meeting, had been called. Cannot fully recall what the meeting was about other than to say that it medically related. Need to add here that this image and my work in the region took place sometime before the advent of AIDS pandemic that took place in southern Africa through the 1990’s and on.

In making this image, this was Africa – the Africa that I knew and grew up in. If something needed to be done, it was done via consensus and through meetings such as this and like this. Meetings were usually relaxed and long drawn out affairs. With these meetings came the elaborate forms of greetings, the praises, the distribution of local news, extensions and understandings. Once all this was over, time was made to deal with matters at hand. A meeting in this context is a happening, its also an event.

Here an interpreter, a male nurse from a local hospital, translates for the doctor. And this was it, another day in somebody’s life.

More images from whence this image is derived can be found here in this collection – African Road.
_____
THE LOST YEARS PROJECT
The basic remit of this, The Lost Years Project, is to raise funds to bring this image together with its associated body of work and other related photography done between 1976 to around 1994 together, to digitise the negatives from which these images are derived and then, to create various products such as prints, print portfolios and books featuring this photography. There is a wealth of photography here that should find its way into the public realm – one way or the other. The photo galleries and PDF eBooks I have on offer here are but a small token of this effort. There’s a lot more from where all this came.
_____
TECHNICAL NOTES: This image was taken with a Leica M-4P with a LEICA ELMARIT-M 28mm f/2.8 [Type 3] lens. The film used was likely to have been Ilford HP5 and developed in Ilford’s Ilfotec HC, a black and white film developer.
_____

This article was originally written and published on October 16, 2012 on a predecessor to this website and uploaded here on 12 June, 2018.