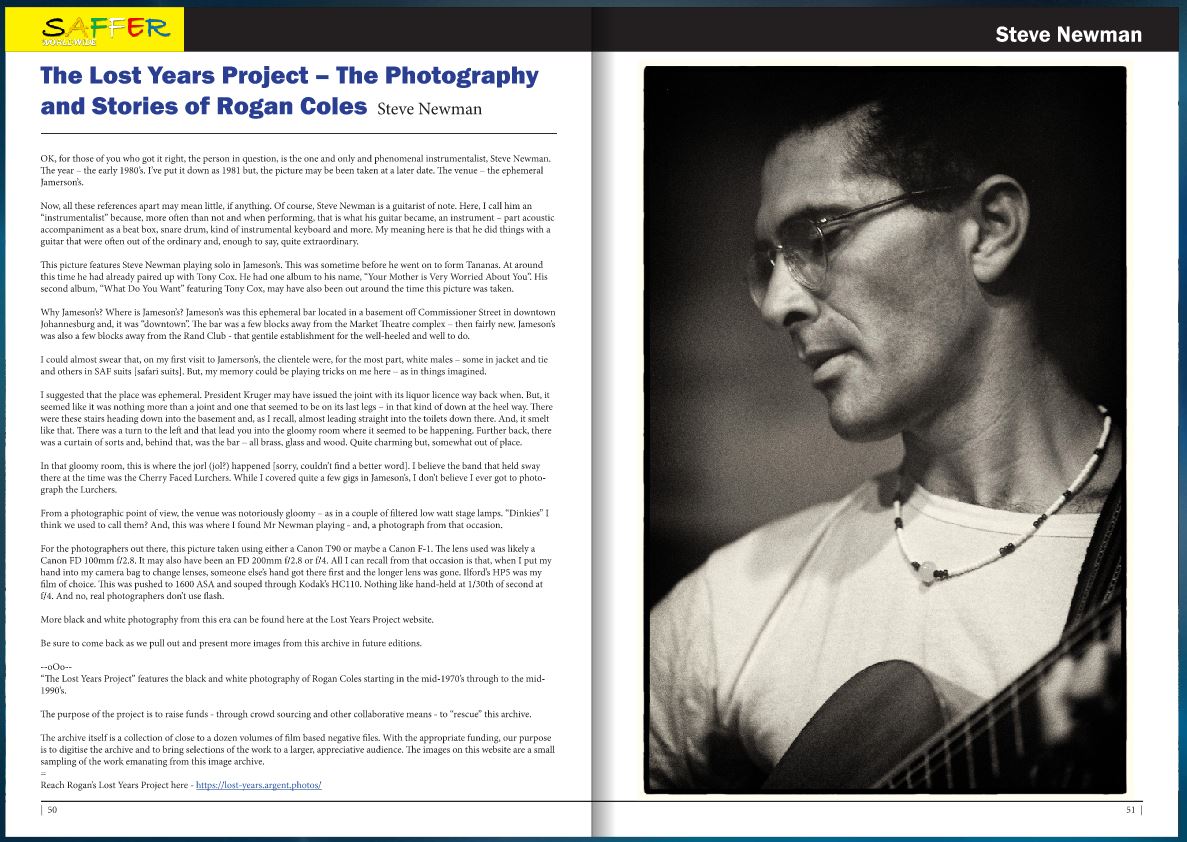 I am immensely grateful to Vossie Vosse for expressing an interest in my photography and for agreeing to run a series of articles featuring work from the Lost Years Project archive. Through this collaboration I’m hoping we can spread the word and share this work with a wider audience.

The SAFFER eZine can be found at the SAFFER WORLDWIDE website.

UPDATE: Sadly, the SAFFER eZine is now no longer. The URL pointing to the eZine has since been “neutralised”.

Here’s the original transcript from that feature article:

Steve Newman
OK, for those of you who got it right, the person in question, is the one and only and phenomenal instrumentalist, Steve Newman. The year – the early 1980’s. I’ve put it down as 1981 but, the picture may be been taken at a later date. The venue – the ephemeral Jamerson’s.

Now, all these references apart may mean little, if anything. Of course, Steve Newman is a guitarist of note. Here, I call him an “instrumentalist” because, more often than not and when performing, that is what his guitar became, an instrument – part acoustic accompaniment as a beat box, snare drum, kind of instrumental keyboard and more. My meaning here is that he did things with a guitar that were often out of the ordinary and, enough to say, quite extraordinary.

This picture features Steve Newman playing solo in Jameson’s. This was sometime before he went on to form Tananas. At around this time he had already paired up with Tony Cox. He had one album to his name, “Your Mother is Very Worried About You”. His second album, “What Do You Want” featuring Tony Cox, may have also been out around the time this picture was taken.

I could almost swear that, on my first visit to Jamerson’s, the clientele were, for the most part, white males – some in jacket and tie and others in SAF suits [safari suits]. But, my memory could be playing tricks on me here – as in things imagined.

I suggested that the place was ephemeral. President Kruger may have issued the joint with its liquor licence way back when. But, it seemed like it was nothing more than a joint and one that seemed to be on its last legs – in that kind of down at the heel way. There were these stairs heading down into the basement and, as I recall, almost leading straight into the toilets down there. And, it smelt like that. There was a turn to the left and that lead you into the gloomy room where it seemed to be happening. Further back, there was a curtain of sorts and, behind that, was the bar – all brass, glass and wood. Quite a charming but, somewhat out of place.

In that gloomy room, this is where the jorl happened [sorry, couldn’t find a better word]. I believe the band that held sway there at the time was the Cherry Faced Lurchers. While I covered quite a few gigs in Jameson’s, I don’t believe I ever got to photograph the Lurchers.

From a photographic point of view, the venue was notoriously gloomy – as in a couple of filtered low watt stage lamps. “Dinkies” I think we used to call them? And, this was where I found Mr Newman playing – and, a photograph from that occasion.

For the photographers out there, this picture taken using either a Canon T90 or maybe a Canon F-1. The lens used was likely a Canon FD 100mm f/2.8. It may also have been an FD 200mm f/2.8 or f/4. All I can recall from that occasion is that, when I put my hand into my camera bag to change to lenses, someone else’s hand got there first and the longer lens was gone. Ilford’s HP5 was my film of choice. This was pushed to 1600 ASA and souped through Kodak’s HC110. Nothing like hand-held at 1/30th of second at f/4. And no, real photographers don’t use flash.
More black and white photography from this era can be found here at the Lost Years Project website.

Be sure to come back as we pull out and present more images from this archive in future editions.

“The Lost Years Project” features the black and white photography of Rogan Coles starting in the mid-1970’s through to the mid-1990’s.

The purpose of the project is to raise funds – through crowd sourcing and other collaborative means – to “rescue” this archive.

The archive itself is a collection of close to a dozen volumes of film based negative files. With the appropriate funding, our purpose is to digitise the archive and to bring selections of the work to a larger, appreciative audience. The images on this website are a small sampling of the work emanating from this image archive.

On this website, we’re also selling a PDF eBook featuring these images – The Lost Years – a PDF Photo eBook